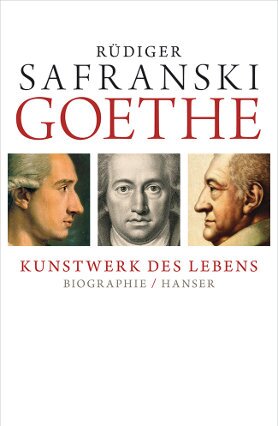 ​​It is hard to imagine a greater undertaking for a biographer than to narrate Goethe’s life one more time. Not only the sheer size of his œuvre, the richness of this life, the number of his encounters and relationships, but also the mass of available material the factual evidence and accounts seems nearly overwhelming and continues to grow. Anyone who ventures despite all that to write a book about Goethe usually limits it to one segment, one episode or period.

Rüdiger Safranski, the award-winning grand master of German biography, has taken up this challenge without restriction and produced a 750-page volume on Goethe’s life. To be sure, he did not set out on this climb to the summit entirely without preparation. Surveying his publications of the last decade: the books on Schiller (2004), Romanticism (2007), and the friendship between Schiller and Goethe (2009), we recognize in this latest work the execution of a long and well-thought-out plan.

Part of the task is to take a particular approach by which this life can remain in sharp focus and project its bright ray forward into our life and times. Nietzsche had called Goethe a veritable event in the history of the German mind, although one without an afterlife. Safranski disagrees: “Goethe did in fact leave us a legacy. True, German history did not take a more favorable course because of him, but in another respect he remains highly influential: the model of a life well lived, one combining a massive intellect, creative power, and wisdom for living.”

The individual shape that life took on has always fascinated us, particularly in an age of such widespread interconnectedness more disposed to conformity than to individuality. How to be widely connected, to partake of many things, and still remain an individual  this, according to Safranski, is what we can learn from Goethe; or as the subtitle of the book puts it, from his “life as a work of art.”

This life is told in chronological order, from his birth in Frankfurt am Main on August 28, 1749, in the house on the Hirschgraben, to his death on March 22, 1832, in his residence on the Frauenplan in Weimar. Safranski surmounts the wall of scholarly studies and previous biographies erected around Goethe and gains entrance, as it were, through the back door in pursuit of the primary sources: the works, letters, diaries, and conversations.

So it is Goethe himself who speaks again and again in this book, an audible voice, a living character expressing his own feelings, moods, and thoughts. It is thanks to Safranski’s art of description and portrayal that the voice fits so well into the course of events. He produces a broad, flowing narrative stream that gathers up all the situations and occurrences, binds them together, and shows their interrelation, yet without diminishing their peculiarity.

The multiple-perspective approach taken by Safranski affords his reader not only the grand panorama, the survey and far-reaching vision, but also the perspective of the protagonist himself  meeting Herder in Strasbourg, Friederike in Sessenheim, or Napoleon in Erfurt. Many well-known and often-depicted occurrences thus appear in a new light. And even though the reader cannot forget the historical distance from these events, he will still be drawn in and feel part of a grand narrative.

One aspect of the narrative is that the author does not spread everything out before us once more, but wisely selects, weighs, and composes. This biography, after all, is quite a lot to manage: a life repeatedly given new twists and meanings by the central character (as in his escape from Weimar to Italy); but also the life of “perhaps the last Universalgenie,” the Goethe who writes poetry, composes novels and plays, but also the one who occupies himself with art history and philosophy, with painting and music, botany and color theory, jurisprudence (perforce) and medicine, and much more besides. Again and again he is caught up in the historical upheavals of his time: the after-effects of the French Revolution and the American Declaration of Independence, the Napoleonic Wars and European struggles for statehood.

Having read the more than thirty chapters, the preface, interludes, and afterword in this book, one will have studied the history of an entire epoch and its culture, and will surely also understand why this era lasting more than eighty years is called the Age of Goethe. It will be a long time before someone else ventures to tell the story of this life.