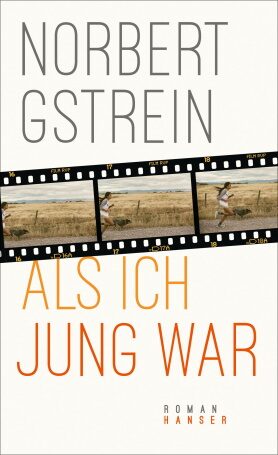 Norbert Gstrein Als ich jung war
[When I Was Young]

Norbert Gstrein
Als ich jung war
[When I Was Young]

Many weddings and more than one funeral

The Austrian novelist Norbert Gstrein, born in 1961, has for a long time been a singular figure in contemporary German-language fiction. Only in recent years, however, as ambivalence has suddenly started to be a dirty word even in literary circles, has it become clear how fascinating Gstrein’s poetics of ambiguity truly is. He offers a literature that leads his readers in linguistically brilliant ways but offers no verdict, pronounces no sentence. In a voice never less than melodious and elegant, his novels are models of creative specificity and descriptive power, showing people not as placeholders of a particular lifestyle but as individuals in complex biographical relationships.

This is certainly true of his outstanding novel A Sense of the Beginning (2013), in which a teacher looks back on his relationship with two of his students, one of whom may have been involved in a terrorist plot. In Die kommenden Jahre (2018) he tells the story of a married couple who, in the heated atmosphere of the refugee crisis, are confronted by the fact that altruism and a willingness to help can equally function as a mirror to their own narcissism.

As a novelist Gstrein, who lives in Hamburg, is above all an explorer of possibilities. For him there is no such thing as absolute truth: a conviction that applies more than ever to his new novel When I Was Young (recently awarded the Austrian Book Prize, after he was passed over for the German Book Prize).

The novel’s main character is Franz, who comes, as Gstrein does, from Tyrol. Franz’s father runs a hotel that specialises in organising grand wedding receptions. Franz acts as resident wedding photographer. One night there is an accident: a young bride is discovered with her neck broken at the foot of a cliff. Whether her death was an accident, suicide or even murder, is one of the novel’s recurrent questions, looping elegantly for more than a decade through the novel’s time scheme. It turns out not to be the only mysterious death in which Franz is more or less directly implicated. Some time later, Franz, twenty-four years old at the time of the accident, moves to the USA to work as a ski instructor in the Rocky Mountains before returning thirteen years later to Tyrol, where his brother has taken over their father’s catering business.

Or that is what might have happened. It might also have happened completely differently, because Franz himself, who returns home to Austria washed-up and penniless, is as impenetrable a narrator as he is unreliable. The driving force of Gstrein’s eerily successful novel is a dark sexuality that is a mixture of shame and the transgression of taboos. Bound up with it are experiences of humiliation, overstepped lines, and a smokescreen of rumours, accusations, suspicion.

There is Sarah, with whom Franz goes up the mountain during one wedding reception and who hovers over the narrative as a diffuse object of his longing. Did he kiss her against her will? Or worse? Did he really not know she was only thirteen years old when whatever happened, happened? In the US there is also an émigré Czech named Moravec, a professor and rocket scientist to whom Franz becomes both ski instructor and confidant. Is Professor Moravec’s obsessive interest in a series of unexplained missing person cases involving young girls more than a weird tic? We’re not to discover the answer to this either, as Moravec commits suicide at the start of the novel in a spectacular way. In an aside, however, Franz relates his own experiences of abuse as a pupil at boarding school, which have left him damaged. And lastly, was Franz – as is alleged by an oddly sinister police inspector, fired up by the speculation – up and about, and even in the vicinity of the cliff, the night the bride died thirteen years ago?

Where the normal channels of public discourse purport to offer clarity and then simultaneously rush to accuse, Gstrein breaks down that supposed moral superiority with literary exactitude. I can hardly think of an author more capable of penetrating so unerringly the contested spaces in which even people themselves become unsure of what happened. The unease you feel reading this novel is not just a murmur in the background; what really drives Gstrein is how much a person can know both about their own deep, dark places and others’. In the unsympathetic figure of Franz, a longing for self-extinction and self-reinvention nevertheless shines out.

‘When I was young,’ Franz writes at the start, ‘I believed in almost everything, and later I believed in almost nothing at all, so at some point during this period I must have lost my faith, my belief.’ The text we readers have before us is Franz’s attempt to salvage himself. Self-evidently, it offers no certainties. But to keep Gstrein company on his project, the project of a lifetime, is a deep and sobering pleasure.

At the beginning there was just a kiss. But is there any such thing as just a kiss? It takes Franz many years to unravel the events of a single night during his youth. Hungry for life and longing for happiness, Franz ends up taking paths that throw doubt on every certainty.
Franz grows up in a backwater of Tirol and has to help his father organise weddings. He photographs couples “on the most beautiful day of their lives” – until one day, a bride dies at her party. Does it have anything to do with him? Or with the fact that he kissed a girl in the same place just a few weeks earlier? He flees to America to avoid these questions. But there, too, another death occurs – only this time, it’s Franz’s friend, who is also trying to balance possible violence with possible innocence. How much do we know about other people? Or of ourselves? This novel explores love and desire, independence and solitude, and asks existential questions with poetic precision.