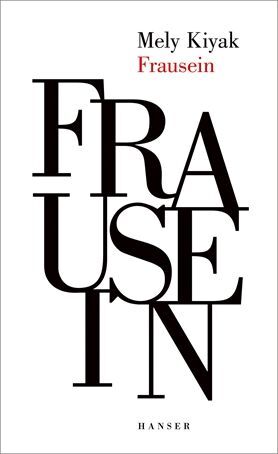 How to hone your vision

There are many quoteworthy sentences in Kiyak’s book. An example is: “The life of a cleaning woman was the reference point for everything.” She is talking about her mother’s job. Two others are: “The world was so exquisite that it regularly plunged me into mental crises. On the other hand, my own experience had little effect on my psychological stability.” It has been a long time since the intricate relationship between one’s background, education and opportunities to move up in the world have been described so succinctly.

Mely Kiyak, born in 1976 in Sulingen near Bremen, is someone who in the past would have been called the “child of immigrant workers”. In her Zeit online column “Kiyak’s German Lesson”, she is an unsparingly sharp polemicist, who exaggerates for effect and has polarising views. However, in her book On Being a Woman, which is just 128 pages long but extraordinarily insightful, there is no trace of all this. Kiyak approaches her biography in careful, precise language with a high level of reflection. Since the publication of French authors here in Germany such as Didier Eribon, Edouard Louis and Annie Ernaux, the topic of class consciousness in literature has gained traction in Germany in recent years, which can be seen as a counter-movement to the middle-class identity of a non-migrant cultural mainstream.

This only partially applies to On Being a Woman because Mely Kiyak is not interested in making a universal thesis on the inequality of opportunity in society. She takes the opposite route. Through storytelling and memories from stages in her biography, which do not stem from the drive to point the finger, a picture emerges of its own accord that goes beyond a purely individual perspective.

One example is from her mother’s life as a cleaning woman. Her mother works at the district court. One of the magistrates likes her. As a sign of his appreciation, he leaves his breakfast roll in the cupboard at work each day, which his wife prepares from him every morning, spread thickly with butter and liver sausage. “For your children,” he says – and to their disgust, she and her brother are forced to swallow the oily bread roll in the evenings. Her mother’s reasoning here is interesting: if an authority figure like a magistrate shows an interest in ordinary folk like them, he deserves only respect and gratitude. The man’s ignorance in distinguishing between being poor and being hungry speaks for itself. The children are only given their ‘proper’ dinner once they have forced down the roll.

Kiyak relates vivid episodes of this kind with deadpan humour for each phase of her life. On Being a Woman can of course be placed in the fuzzy category of an examination of the writer’s identity. When Kiyak’s father, a Kurd who has immigrated from Turkey, comes home from the factory in the evening, a dialogue between him and his young daughter takes place in a volley of back-and-forth questions. “Who am I?” she asks. “Who are you?” he asks back. Kiyak only finds out the answer later on: on one hand, she is a woman who has to find out about being a woman all by herself because she is denied access to information. On the other, she is a voracious reader and writer. She is one of the first generation of immigrant children, as she remembers, allowed to attend the same school as German children. A teenager who realises that the right to be German is hard-won. An intensive reader who studies at a university as far away from her parents as possible to prevent them from visiting too often. And someone who realises that studying literature has nothing to do with her expectations of reading. When she goes home to visit, her parents keep her out of the kitchen because now she is a student, she should not waste herself on lowly activities. Finally, she is accepted into the Institute for Literature in Leipzig, where the later Nobel Prize laureate Herta Müller takes apart her texts: “I learn from this.”

The narrative framework of On Being a Woman is Kiyak’s enigmatic eye disease – an inexplicable, frightening clouding of her vision. Her book is exactly the opposite: a programme on how to hone your vision.

Mely Kiyak talks about all the details that make life meaningful. She reflects on conversations about wisdom and ignorance that she and her father had after his shift at the factory when she was a girl. About cousins who talked about desire and found pictures to explain to their innocent relative what lust was. About growing up between countries and classes, saddled with the baggage of foreignness and curiosity about unknown experiences. About being alone, finding yourself and about family. What is femininity if you overcome the view from the outside and are left alone? Sincere, fun-loving, tender and disarmingly clever, Mely Kiyak reminds us that conditions teach us how to love and live.