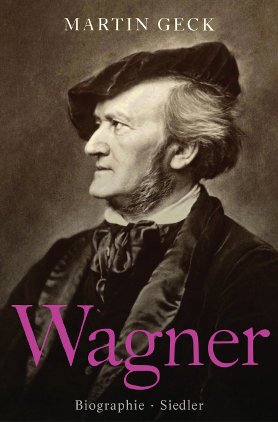 [The English translation of this book has been published by The University of Chicago Press, Chicago 2013: Richard Wagner. A Life in Music]

​The composer Richard Wagner, whose two-hundredth birthday is being celebrated this year, is one of the most intriguing and controversial figures in music history. As to be expected, the anniversary has produced a flood of new biographies and studies, which owe their existence more to the calendar date than to any gaps in research being filled, and which therefore don’t necessarily offer a reassessment of the man or a deeper understanding of his work. A notable exception, where festive occasion and new findings are fortunate to overlap, is the Wagner biography of Martin Geck.

The trained musicologist Geck, born in 1936, has long been considered one of the most fascinating figures in his field in Germany thanks to his unconventional style and approach. Though renowned as the author of works on Bach, Mozart, Beethoven, Schumann, Mendelssohn, and Brahms, he is still regarded as a Wagner specialist, his knowledge and insights having steadily grown since becoming the founding editor of Wagner's complete works in 1966. What sets him apart more than anything is his broad intellectual horizon. Geck is not only a music scholar by training but a theologian and philosopher as well. He is highly literate, and is just as versed in the jungle of contemporary theories as he is in the labyrinth of historical research. He has a firm command of both the academic and journalistic styles of writing, and knows how to combine them into a brilliant and lively narrative voice.

A master of his material and the tools of his trade, he has no need to posit a hypothesis. It is enough for him to pose questions, which he then attempts to answer. But before undertaking any of this, Geck explains his “writerly ethic”: “It is not my aim to ‘figure out’ Wagner, but to learn something about myself and the age I live in.” In short, he is out to discover what’s behind the undiminished appeal of Wagner, particularly his opera works; what ideas, ideologies, values, or revaluations posterity attaches to them; whether his work conveys a “message” and, if so, how this differs from the projections of stage directors.

The author’s own perception of Wagner is described as “fascination and dread in a delicate balance.” This confession sets the stage for his subsequent investigation. Geck’s concern is the contradictions and ambivalencies of Wagner’s character, of his work and its reception. He is not so much the researcher, who endeavours to remain objective, aloof and abstract at all costs, but the learned and sceptical analyst-interpreter, who is nonetheless always emotionally involved as only an enthusiast can be. From this perspective the composer’s self-mystifications can be seen as part of a Gesamtkunstwerk, his remarks about “everything under the sun,” copiously recorded in Cosima’s diaries, a “treasure trove and trap at once.”

Martin Geck performs a graceful balancing act, between the “theatrical primal scene” in Wagner’s life and his later role as a “scent hound of modernity.” He effortlessly glides through the operas in chronological fashion, deploying a wealth of material, quotes and other food for thought, references and cross-references, without ever becoming wordy – bold leaps and accelerandos included. The “Apropos” section at the end of each of the book’s 14 chapters offers brief digressions, examining the relation between Wagner and Jews, both contemporary and later-born, skilfully applying the principle of ambivalence to the awkward question of whether or not Wagner’s anti-Semitism was detrimental to his work and legacy. Sample scores and informative illustrations, along with an index of works and a list of references, round off one of the most thought-provoking books to appear to date about the complex case of Richard Wagner.