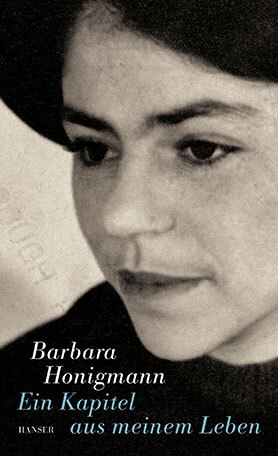 In her book Ein Kapitel aus meinem Leben [A Chapter from my Life], Barbara Honigmann expands upon the important themes of her literary career thus far. Her earlier books such as Eine Liebe aus nichts [Love from Nothing] or Roman von einem Kinde [Novel of a Child] are to a large extent steeped in autobiography, and so these memories of her childhood and adolescence, which go together with her attempt to use writing as a way of becoming closer to her own mother’s being and personality, take up the themes of her earlier work.

Alice Honigmann, her mother, really must have been a most extraordinary woman. She was born in Vienna in 1910, the daughter of Hungarian Jews who either owned or ran estates, but spent her formative pre-school years (and, later on, the summer months) at her maternal grandparents’ estate in provincial Hungary. Her world was divided into the „good“ Jewish world, in which people were cultivated and knew how to behave, and the „other“ world of „fighting and drinking“ Hungarian peasants. However, this view of the world by didn’t remotely stop her from hooking up with the Austrian communists as a young woman in Vienna in the early 30s, and becoming active in the pro-Soviet „Red Aid“, where she also met the young British student Kim Philby. Philby later became well known for working as a double agent for the Soviet Union. Following the anschluss of Austria to the German Empire, she and Philby went to England where the young journalist – and thus, indirectly at least, his wife too – was recruited by the KGB. In order better to disguise themselves, they became integrated into the ultra-conservative echelons of British society which harboured wholehearted sympathy for Franco and other figureheads of European fascism. For Litzy Philby – as she was now known – it was an exciting time. During the Spanish Civil War her husband was sent to Spain as Foreign Correspondent to report for conservative British newspapers and, simultaneously, to send interesting information to Moscow for the KGB. During this period, Litzy lived in Paris. Here she carried on a mundane – from the outside, at any rate – existence at the Quai d’Orsay, where she passed secret messages from Kim on to their KGB contacts.

Before the Germans occupied Paris, she returned to London. She had long since separated from Philby; now they were divorced. She lived through the rest of the war in London, still a committed Communist. She was highly impressed by the proud and unyielding stance of the English towards the terrible devastation caused by German bombs and, later on, would often love to cite this as an example of the British „style“ she held in such high regard. Together with her husband Georg Honigmann, the author’s father, Alice left England at the end of the 40s to live in the GDR. In 1949 Barbara, the couple’s only child, was born in Berlin; shortly afterwards, this marriage collapsed too. Thus the child never knew her parents as a couple but always as good friends.

This is the situation that Barbara Honigmann tackles in her book. In seventeen untitled chapters which seem to be arranged in no particular order so far as place and time are concerned, the author recalls the most diverse events from her childhood and youth in East Berlin, the capital of the GDR. She and her mother lived in a large apartment in a villa in Karlshorst along with several other „man-less“ women and their daughters who made their new homes there after the war.

The book follows on from earlier works in which the author already touched on other important experiences and events from her life. In Ein Kapitel aus meinem Leben, too, Honigmann’s calm narrative style creates the impression of the narrator only starting to get close to her topic through the very act of writing – which thereby gains its characteristic conversational and immediate style. As well as being a personal history, though, this book is also a depiction of the circumstances of Jewish intellectuals in the GDR, a group of people who were viewed with a high degree of ambivalence by the population and politburo alike. On the one hand, practically all of them could refer to a communist past, persecution by the Nazis, and years in exile; on the other hand, the SED emphasised its absolutist aspirations by banning anyone from simultaneously being a member of the party and a member of the Jewish community. The people the child in Berlin related to, apart from her schoolfriends, were her parents’ friends, comrades and others who had shared their experiences – above all during her annual holidays in Austria and Hungary. Like a puzzle, all the little snapshots, anecdotes of friends, conversations with her father, and her own memories contrive bit by bit to form an image of her mother – but it’s a puzzle that doesn’t quite work out, either for the reader or the daughter herself. However, this incompleteness seems to have been part of the mother’s personality (or how she chose to portray herself?); she claimed not to know her precise date of birth, nor the years of her divorces, nor her original hair colour. Yet just as in her earlier books, Honigmann generally refrains from analysing the interpersonal relationships. She restricts herself to narration alone, and leaves the reader to draw his own conclusions.

The style of precise observation is one which she pulls off magnificently in this volume. However, to describe it as a book about her mother would be to miss the book’s central thrust. Becoming closer to her mother is ultimately nothing more than the depiction of a large part of her own history. Perhaps this is another reason why Honigmann eschews any kind of precise documentary-style investigation into her mother’s papers: because it’s not essentially about her mother. The obvious gaps in the picture of her mother may therefore offer us a clue as to the deeper intentions behind the book: namely to depict the almost mysterious role that the mother embodied in the child’s eyes, and thereby to show how the child dealt with this situation.

With this book, Barbara Honigmann has told the next chapter in her own life – it could also be entitled „My Mother“. It is undoubtedly both difficult and exciting to have a mother like Alice Honigmann. Barbara Honigmann describes her with such composure, humour and love that after reading this book, you feel that you’ve got to know two quite different yet equally impressive women.