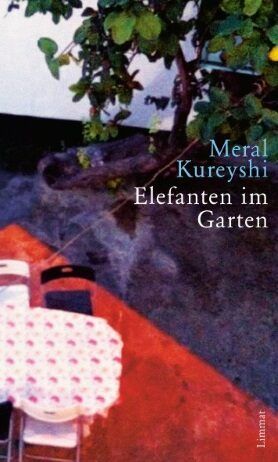 Meral Kureyshi did not want to write a novel about refugees.

In fact, her prose debut, "Elefanten im Garten," doesn’t belong within the context of the mass migration of people fleeing their homelands that has occupied the European public for over a year now. That said, the book deals with issues around forced migration, loss of homeland, growing up, finding one’s way in a new country, learning a new language and culture. It’s about being an outsider, questions of integration, grief and loss, memory and new beginnings, in short: the experiences and trials of a young woman living in exile. It was fortunate for the slim book that it coincided with the much debated current refugee crisis: The talented young writer, who had studied at the Swiss Literature Institute in Biel, gained increased attention as a result of it, and was shortlisted for the Swiss Book Prize.

Meral Kureyshi, who is of Turkish descent, was born 1983 in Prizren, Kosovo; with her family, in 1992, she fled the war in Yugoslavia for Switzerland. The father, who had traveled ahead of them to apply for asylum, later reported that he had kissed the ground when he landed in Zurich. The asylum process took more than thirteen years to be decided - a period filled with restrictions, fear, and anxiety, which the parents and children dealt with in vastly different ways. The daughter Meral found refuge in writing as a young girl. She took notes on her experiences, real and fictional, thoughts and feelings, first writing them down in Turkish and later in German.

The sudden death of her beloved father in 2006 served as a catalyst for her to search for her roots and identity through writing. She contrasts her memories of an idyllic childhood in the Ottoman tradition with impressions gleaned from her current life in Switzerland. The notes she had collected inspired her as much as the new stimuli from her journeys to new and old locations, including places she had visited at the beginning of her exile. She also traveled to her hometown which had changed as much as she had.

The result is not a conventional biographical narrative, but an artfully fragmented poetic text that oscillates between different time periods. She mixes imagined and real experiences and offers a piercing, at times merciless analysis of what immigrants must deal with on a daily basis. Much is only hinted at in poignant, sometimes oblique images and pithy dialogues. The narrative tone is nimble and she plays with this second language in a unique and creative way. All of the characters are vividly drawn: the father, who she mourns, and who is the catalyst for her journey to find her roots; the visually impaired and nervous mother who withdraws more and more; the grandmother who makes a pilgrimage to Mecca: the relatives, friends and acquaintances in Prizren and Bern. And then there is the eponymous, "elephant in the garden," which the imaginative young girl has invented, so she can report about something after the holidays to impress the kids at school.

Meral Kureyshi grew up with fairy tales, poems and stories in a multi-ethnic country, where cultures and languages ​​mingle and enrich each other. Today she would like to share a bit of this culture with Swiss children and to that end has founded a poetry workshop in Bern. We will be hearing much more from this young writer.

When her father unexpectedly dies, the young narrator’s life begins to unravel. She spends a year in limbo, attending random lectures at the university, taking train rides in search of places from her former life and unexpectedly ends up in Prizren. Memories of her idyllic childhood in the Ottoman-influenced city, which she and her family were forced to leave when she was ten, powerfully infiltrate her present life in Switzerland.

She does not find the world of her childhood in Prizren, in fact, she also has changed. She searches for a place in her new country and new language. She finds it difficult to cope with her lonely and dependent mother, and with every new German word she learns, the distance grows between them. While her mother lives a life of increasing isolation, the narrator attempts to escape from stasis.

"Elefanten im Garten" is a wonderful novel about a life shaped by migration—origin and alienation, loss and perseverance, but it also is about a new beginning and redemption – through storytelling.